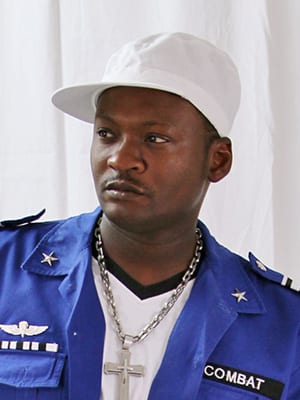 Karim is an anointed rap artist, singer, and song writer who is a born again Christian – converted from the Muslim faith by the love of Christ. He has been rapping since 1984. He was born in Rochester, New York, but he now resides in Riverdale, GA  with his wife and two children.

Since 1984 Karim has performed at over 400 functions repeatedly in places such as New York, Maryland, Alabama, Georgia, Oklahoma, Pennsylvania, Texas, Mississippi, North Carolina,  and the two cities of Dakar and St. Louis, Senegal in West Africa. He currently raps at different events in Georgia and abroad while touching the heart of God’s people right where they are. He was a featured artist on a National Black History Month cassette which was sponsored by COCA-COLA. This cassette was distributed nationally to over one thousand students. Karim has been the recipient of the SCLC  RAPPING FOR OUR FUTURE ORATORICAL CONTEST AWARD for 1st place in 1986. He also came in at 1st place at the BET/BLACK EXPO NATIONAL RAP CHAMPIONSHIP TITLE IN 1997.  In 2007 Karim was musical guest on the (Personalities, Profiles, and Perspectives Radio Show) with Radio Host Kay Thompson.  Karim has also been a guest on the Atlanta Live television show  hosted by Pastor Alan Parker of the New Vision Church in 2008.  He has been a special guest on several college and local radio stations in the Atlanta  area.  He has opened up for  Stevie Wonder,  December Radio,  Classic rappers Heavy D, and Big Daddy Kane.  Karim is currently  rapping in various  Prison Ministries. He has rapped at over 15 different functions inspiring prison inmates to have a better outlook on life.

Karim has also been a student of Mrs. Beverly Poitier-Henderson (daughter of Sydney Poitier) at the Northside School of the Arts Drama Program for two years.

Since Karim received Jesus as his LORD and SAVIOR, he has polished the gift God has given him and ministered the gospel in the form of rapping and singing at over 50 different functions in Georgia with the help of FISHNET MINISTRIES. Karim currently travels to do his music ministry with  the Bill Glass Champions for Life Prison Ministry organization. Karim feels that his assignment from GOD is to promote the Gospel with simplicity and understanding without compromise.

Karim is very displeased with the violence and indecency found in rap music today. He intends to make a positive contribution to communities all around the world with his new release, Freedom Is Gone. Freedom Is Gone came about after Karim worked in a Correctional Institution with two of his co-workers, (C. Johnson and J. Raymond). They felt that young people should be discouraged from committing crime. The music track was made by an up and coming producer by the name of Mike Thomas.

Karim has released  a new album entitled ‘ RELEASED’ that can be reviewed at Reverbnation.